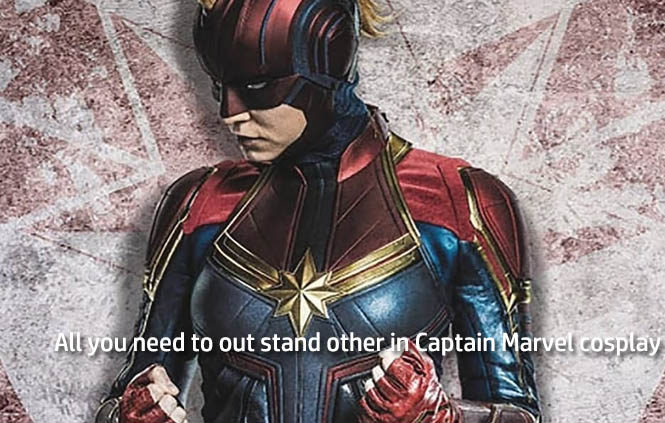 Captain Marvel is an inspiration to many both on screen and off. She is the first female hero in the Marvel Cinematic Universe who got her solo movie. Her powers include flying, fighting, enhanced strength and shooting bursts of energy from her hands. When she joins the Avengers for the final climactic fight in Avengers: Endgame it’s clear that her powers have increased. This is because at one point she is the only one stopping Thanos from doing the Snap again. Her power is incredible and so, of course, anyone would love to cosplay her.

Her solo movie suit is definitely one of the most complicated ones and it’s quite hard to make it accurately. So there are many who opt for the comic version route. But there is a way to get the ease of making the suite along with the style of the movie suit. This can be done if you choose to cosplay her Avengers: Endgame suit rather than her solo movie one. She wasn’t in Endgame movie much apart from a handful of scenes but the Endgame suit exudes her power and it is also a very stylish captain marvel costume. Moreover, this will also make you stand out from others in any crowd of Captain Marvel cosplays. Here’s how you can get her to look:

Look at pictures of Captain Marvel from Avengers: Endgame and you will find that her suit is way different from her solo movie one. To get this look, you need to get a circular collared, tight, crimson-colored leather jacket. Then you will need to make the upper part of the suit which contains the star and the two golden lines that go up to her neck and shoulders. You will notice that in this suit the star is embedded in the suit and it doesn’t stand out as much. To get this you need to first make the star using scissors, metallic gold paint and cardboard. Then scrape away a little part of the chest portion of the leather jacket. Now you can use industrial strength glue to paste the star there. Make sure you also have some blue cloth paint because you will have to paint the portion from her neck to the star as well as her shoulder pads in that.

The style of both, here is different in the Endgame suit and they look much sleeker. To get the glove style, use a dark blue leather glove and cut off the upper part of the fingers. For the gauntlets use leather cutouts, but make sure to make the depressions according to the design.

Make use of tight leather red pants and then cut out pieces of blue leather to paste it according to the design on her pants. You can also stack the same leather cut out pieces on top of one another to make the parts which have elevation and stand out more. 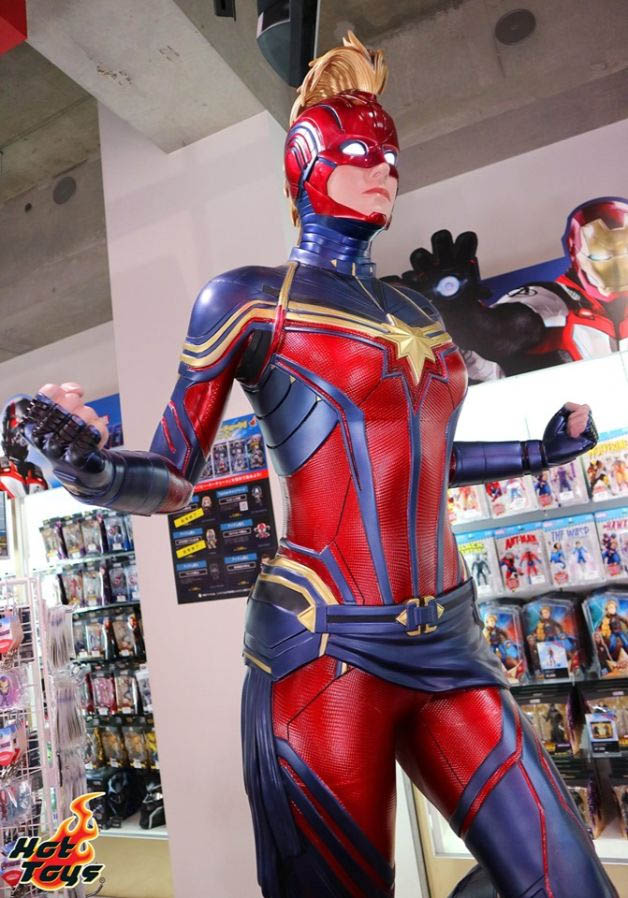 The sash and belt:

Here instead of the iconic red sash there is a blue one which wraps around her hips and then hangs almost to her knees. Don’t bother going into any type of complication here and just use a dense blue cloth to wrap around. The belt is also present here although it may not be as prominently visible as it was in her solo movie suit. To make the belt first get a thin, blue leather belt and then add on the little gold details by cutting and coloring leather in the appropriate shape. Also, make use of leather cutout to make the hip pads. Make sure that the hip pads get a little hidden by the sash and that the belt buckle and the sash lines perfectly to make it look like one thing.

Her boots are also fully blue and reach up to her knees. Simply get knee high boots in blue or if you can’t get them in blue, then just color it as such. Her boots are also elevated in the front part and you can do that too. All you have to do is cut the cardboard in that shape. But it’s way too much of a hassle and moreover, it can get damaged as well since you will have to walk to places. As such, it’s not really recommended by us.

This suit will surely make you stand out amongst other cosplayers as it is the last suit she is seen wearing in Avengers: Endgame and let’s be real- it looks badass. We also could have recommended you to use a full body Catwoman-esque red leather suit, to begin with, but the jacket and pants will make it easier to go to bathrooms.